A previously unknown canyon hidden beneath two kilometres of ice covering Greenland has been discovered by a group of scientists, led by a team from the University of Bristol.

The canyon is at least 750km long and in places as much as 800m deep and is on the same scale as parts of the Grand Canyon in Arizona, USA.

This remarkable, previously unknown, feature is thought to predate the ice sheet that has covered Greenland for the last few million years and has the characteristics of a meandering river channel. By comparison, the longest river in the UK, the River Severn, is about 350km long and much less wide and deep.

Professor Jonathan Bamber of Bristol’s School of Geographical Sciences, lead author of the study, said: “With Google Streetview available for many cities around the world and digital maps for everything from population density to happiness one might assume that the landscape of the Earth has been fully explored and mapped. Our research shows there’s still a lot left to discover.”

The scientists used thousands of kilometres of airborne radar data, collected mainly by NASA and researchers from the UK and Germany over several decades, to piece together the landscape lying beneath the ice sheet that covers most of Greenland and obscures it from view.

At certain frequencies, ice is transparent to radio waves that can travel through the ice and bounce off the bedrock underneath. By analysing all the radar data in a consistent way the team discovered a continuous bedrock canyon that extends from almost the centre of the island and ends at its northern extremity in a deep fjord connecting to the Arctic Ocean.

They believe the canyon plays an important role in transporting sub-glacial meltwater produced at the bed from the interior to the edge of the ice sheet and ultimately into the ocean. Even before the presence of the ice sheet, going back at least four million years, the evidence suggests the canyon provided a pathway for water from the interior to the coast and was a major fluvial system.

The research was funded by an EU programme called ice2sea and the UK Natural Environment Research Council (NERC).

Professor David Vaughan, ice2sea co-ordinator based at the British Antarctic Survey in Cambridge said: “A discovery of this nature shows that the Earth has not yet given up all its secrets. A 750km canyon preserved under the ice for millions of years is a breathtaking find in itself, but this research is also important in furthering our understanding of Greenland’s past. This area’s ice sheet contributes to sea-level rise and this work can help us put current changes in context.”

Some of the data used in the study came from NASA’s Operation IceBridge, a six-year mission that is the largest airborne survey of Earth’s polar ice ever flown.

Michael Studinger, Operation IceBridge Project Scientist at NASA Goddard Space Flight Center said: “Two things helped lead to this discovery. It was the enormous amount of data collected by IceBridge and the work of combining it with other datasets into a Greenland-wide compilation of all existing data that makes this feature appear in front of our eyes.

“It is quite remarkable that a 750km-long channel the size of parts of the Grand Canyon is discovered in the 21st century below the Greenland Ice Sheet. It shows how little we still know about the bedrock below large continental ice sheets.”

The research is published today in Science. 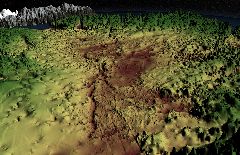 A video animation of the data is available via YouTube, and further explanation is available on the NASA website.

Ice2sea brings together the EU’s scientific and operational expertise from 24 leading institutions across Europe and beyond.  Improved projections of the contribution of ice to sea-level rise produced by this major programme funded by the European Commission’s Framework 7 Programme (grant agreement 226375) will inform the fifth IPCC report (due in September this year).  In 2007, the fourth Intergovernmental Panel on Climate Change (IPCC) report highlighted ice-sheets as the most significant remaining uncertainty in projections of sea-level rise. www.ice2sea.eu

To request an interview with Professor David Vaughan, or for more information on ice2sea contact, Paul  Holland at the British Antarctic Survey Communications Office, Cambridge.

Copies of the paper are available on request.